More adventures in the kitchen with ginger... Jewish Ginger Cake!

I once went to a cafe with a friend who ordered the Jewish Ginger Cake that was on display.  I ordered the apple tea cake, which was very nice, but my friend's Jewish Ginger Cake was sticky and sweet and oh so good!  He has since tried to make it (he is a great cook, but not much of a baker though) and it has collapsed every time.  He has since christened it "Collapsing Jewish Ginger Cake".  But don't let the name mislead you - this cake is not just for Jews.  Or for gingers either, for that matter.  This cake is for anyone who loves a good old fashioned sticky sweet ginger cake.

As part of my adventures in the kitchen with ginger, (and also because I haven't made a cake since making a massive christmas cake, and that was 2 months ago) I decided to have a go too. 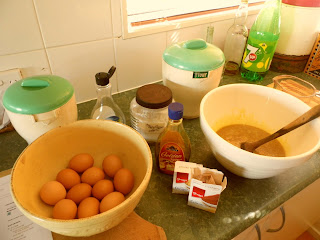 2 eggs (although my eggs were small, so I used 3)
1 1/4 cup sugar   (I only used 1 cup sugar, because I figured it will be sweet enough as it is, especially with 1 cup of golden syrup in the recipe too)
1 cup vegetable oil
1 cup Golden Syrup
2 tsp powdered ginger
1 tsp cinnamon
1/4 tsp baking powder
1/2 tsp baking soda (I forgot to add the baking soda (actually I didn't even notice it in the recipe!), but it still turned out ok)
2 cups self rising flour (or use plain flour, and add 2 extra tsp baking powder, which is what I did)
1 cup warm water

Preheat the oven at 160 degrees C. 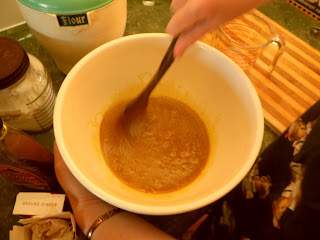 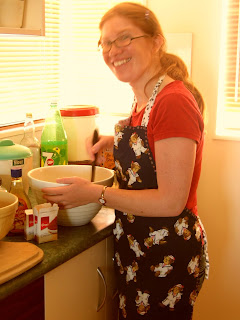 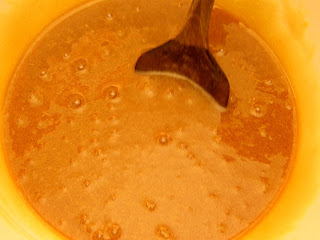 Mix the dry ingredients in a separate bowl, and pour into the eggs/syrup mixture gradually, alternating with the warm water. 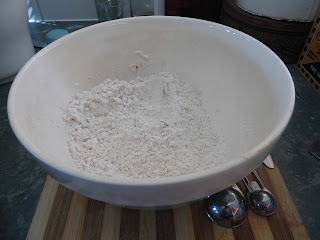 Beat until smooth.
(At this point I had been using a wooden spoon, but I found my batter had suddenly become lumpy and I couldn't beat it out with the wooden spoon, so out came the magical whizzy stick (a handheld electric mixer) and that did the job very quickly.

Grease a cake tin (preferably one with a removable base) or line with greaseproof paper.  My flatmate warned me at this point that it is a very sticky cake, and so try to put it into a cake tin that it is easy to get out of.  I didn't have greaseproof paper, so I just used a liberal amount of butter and dusted it with flour, and that worked perfectly fine. 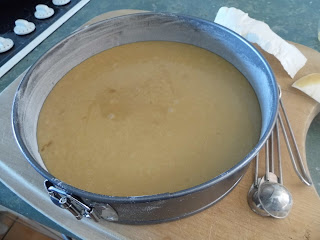 My cake didn't collapse, (although it did start leaking out of the bottom of the cake tin - I don't think I had secured the base properly) and it started burning on the bottom of the oven.  I just popped a baking tray underneath the cake tin to catch any more drips, but it had stopped by then.
I don't think my cake was as sticky as my flatmate's, so perhaps it did need the extra 1/4 cup sugar, but the cake is sweet and I don't think it needs to be any sweeter.  Or perhaps it was omitting the baking soda that made it less sticky.  I am not sure, so will need to practice again and make another one.  And I will need to make another one, as this one disappeared rather quickly. 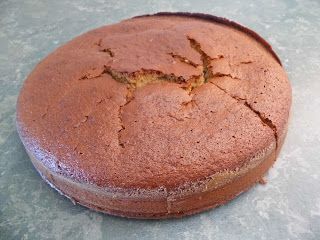 It was delicious served warm with home made vanilla ice cream, but it is also good served with either cream or yoghurt (yoghurt being the healthier option!). 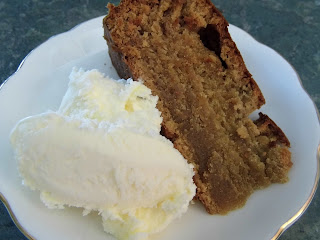 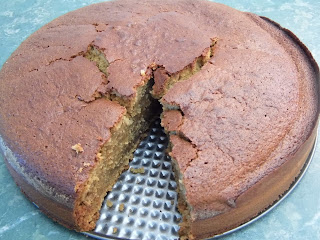